Google TV’s software code reveals that 50 FREE live TV channels are reported by 9to5Google. The new feature is said to be called “Google TV Channels” based on the text found in the launcher app. 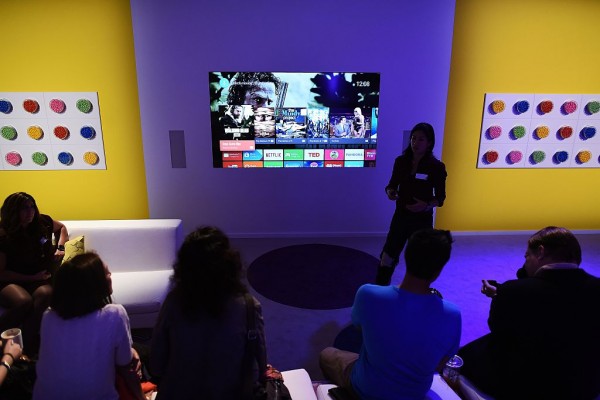 (Photo : JEWEL SAMAD/AFP via Getty Images)
A Google employee exhibits the functionalities of an Android TV device nexus player during a media preview in New York on October 29, 2014. Google ramped up its mobile arsenal, upgrading its Nexus line with a new tablet and smartphone, and unveiling its revamped Android software, to be dubbed “Lollipop.” The US tech giant also announced the launch of a streaming media player for music, movies and videos, which can also allow users to play games via the Android TV device.

According to The Verge, there is also an image in the software that hints at the channel inclusions in the new service. The channels are ABC News Live, NBC News Now, and USA Today. There are also some noise channels like American Classics and Deal or No Deal.

Google TV may also get Hallmark Movies channel and a Reelz channel. Many of the channels are also available on other free streaming TV series, such as Sling TV, Pluto TV, and Philo. The only difference is that you need to sign up if you want to access these channels on other platforms.

What makes Google’s approach different is that you can access these channels in just a few clicks; therefore, you can watch them easily.

Google TV, the successor of Android TV, has been making ways to make its platform smarter and more competitive. This has led to deeper integration with apps.

Here is a full list of the free TV channels that will be coming to Google TV:

Based on this list of channels. It’s noticeable that Google has managed to land some well-known channels and brands. Although this is still a long way from having over 200 channels of Samsung TV Plus, it’s a strong start as there is sure to be something for everyone.

Aside from these new channels coming to Google TV, there are plans for another update for its Chromecast TV dongle to arrive this month. So far this year, Chromecast has only gotten a single Android security update in mid-July that comes with new security bulletins. That said, it was posted on Twitter that a second bulletin has now been listed, which was tagged as August 2022 security level.

Additionally, Chromecast will also start reciting OTA updates the same month the bulletin is released. However, there are no details that have been shared about what the update would contain or the security issues that it would address for the Google TV dongle.

This article is owned by TechTimes

ⓒ 2022 TECHTIMES.com All rights reserved. Do not reproduce without permission.