It took SoFi Technologies (SOFI -3.28%) a long time to close its acquisition of Golden Pacific Bancorp, but the company finally did it earlier this year, obtaining the long-coveted bank charter that came with the acquisition.

It took a little time to get the bank integrated and positioned within the company, but now SoFi is starting to see the benefits of being a bank. This is evidenced by its second-quarter results, which beat analyst estimates and pleased the market, sending shares surging more than 28% on the day after SoFi reported earnings. 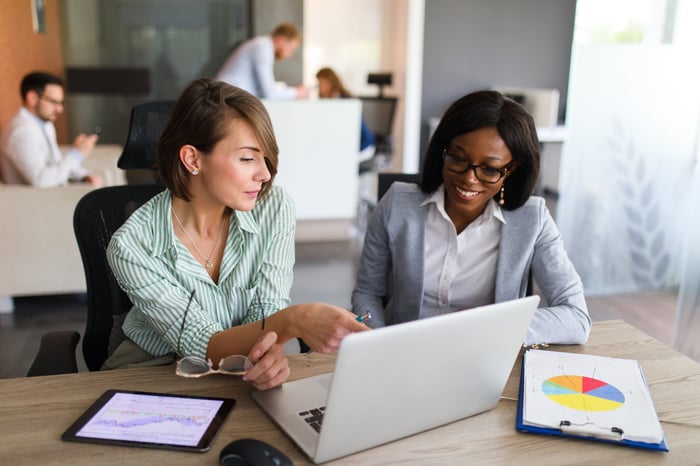 This was kind of a waste because holding loans and collecting recurring monthly interest income over the life of a loan is way more profitable than selling the loans to investors for a one-time fee. It’s even more of a shame because SoFi serves such high-quality customers who, on average, have extremely high FICO scores and annual incomes, making these loans less likely to default and setting up a nice risk-reward proposition.

With the bank charter, SoFi has moved toward holding loans for six months on average, which means a lot more interest income. In the first quarter of the year, SoFi held roughly $7.2 billion of loans on its balance sheet. At the end of Q2, loan balances had jumped to roughly $8.2 billion.

As a result and with some help from higher interest rates, which increases loan yields, SoFi’s net interest income, the profit banks make on loans, securities, and cash after funding those assets, came in at $122.7 million in Q2, up from about $95 million in Q1. That’s despite the fact that SoFi’s total loan originations in Q2 came in a touch weaker than in the first quarter, as mortgage and student loan originations plummeted in Q2. The bank charter enables SoFi to create better unit economics from its lending division, which is why it will help the company become more profitable.

Another big benefit of the bank charter is that it allows SoFi to gather deposits, a lower-cost funding source that should enable the bank to make wider margins on its loans over time. As SoFi’s CEO Anthony Noto said on the company’s recent earnings call, it took SoFi three years to accumulate $1 billion of deposits. With the bank charter, SoFi has added $1.6 billion of deposits in just three months.

Noto also said that roughly 80% of the digital bank’s deposits are from direct deposit members, “demonstrating the quality and stickiness of these deposits.” Truthfully, I don’t know how sticky these deposits are just yet. SoFi is now paying as much as a 1.8% annual percentage yield on deposits, and the federal funds rate currently sits inside a range of 2.25% and 2.5%. SoFi has definitely increased its deposit costs faster than other banks, and the difference between its deposit costs and higher-cost warehouse funding that it previously used is only about 1% right now.

I don’t want to downplay the 1% difference because it is certainly meaningful, but I would hope for a larger deviation, which Noto said will happen as the rising-rate environment continues. Higher APYs are great for depositors but not always so great for shareholders because it results in narrower margins, and people who bring their deposits to SoFi for a high APY are just as likely to take their deposits elsewhere if they are offered more yield.

Still, it would seem like SoFi is sprinting for growth right now and could be using its high-yielding deposit offering to bring more people onto its flywheel. I suspect the company will be able to improve its deposit base over time, and overall having this lever is still so much more attractive than having to rely on other higher-cost funding sources.

Some investors may have not been so thrilled when they heard that SoFi was pursuing a bank charter because it will force the company to operate in a highly regulated environment and hold regulatory capital, which can hamper growth. But the advantage of being a bank is profitability, which so many high-growth tech stocks talk about but don’t achieve.

SoFi continues to grow adjusted EBITDA and in its first full quarter, SoFi Bank, the subsidiary that houses SoFi’s banking operations, generated a $25 million profit. The contribution of SoFi Bank will continue to make the entire company more profitable over time as SoFi grows loan balances, potentially holds them on the balance sheet for longer periods of time, and improves its deposit base.

Furthermore, SoFi will now see its business benefit from rising interest rates, which offer a hedge against inflation. All of this is why SoFi chose to embark on the long process of getting a bank charter — and now it’s starting to pay off.